Smarter Kids and How They Got That Way Back

Y ou can’t make a kid a genius, but studies show that the wiser the nurturing, the smarter the kid. However the important thing for growing a smart child is learning through real world experiences as much as possible. Thats the key. Here are some of the research and data on the influencing factor for raising a smart kid.

Thirty percent of children under the age of 2 have television sets in their bedrooms.

And 59 percent of under-2s watch two  hours of TV every day. The International Pediatric Association recently issued a warning urging parents not to let infants and toddlers watch TV. Giving little ones no known benefits, TV impairs cognitive skills and wastes crucial brain-development time that should be spent conversing with real people, says infant-language expert Roberta Golinkoff. “Language is crucial to children’s learning, and the language they get from the television is not tailored to their individual needs. It will not answer their questions or follow their leads, which is how you create smart kids.”

And in Nepal, TV, smartphone has developed as important tool especially while feeding the kids. While it may seem to be an easy solution, but too much of it can affect the development of child. Time to think.

"Six-year-olds who were breastfed consistently as babies score 5 percent higher on IQ tests than their 6-year-old peers who were not."

This stat is based on a study that followed two groups of new Belarusian mothers and their children. One group of mothers breastfed their babies more exclusively (giving them no other food or liquid but breast milk) and for longer (up to a year) than the other group, which breastfed less exclusively and for shorter durations. The children in the first group scored higher in reading, writing, and mathematics.

"The first thing a woman can do to raise a smart child is to breastfeed,” says geneticist Ricki Lewis. Human milk has a greater percentage of fat than cow’s milk, needed to insulate our abundant brain cells; a calf needs the protein in its milk for fast growth.

In Nepal 56.9% of children less than six months old are breastfeed exclusively.

Children who play the piano or a stringed instrument score 15 percent higher on verbal skills than children who don’t play an instrument.

The study that yielded this stat involved students from Boston-area music and public schools; their average age was 10, and the musicians among them had studied music for at least three years. As the authors point out, many previous studies show correlations between musical skills, language skills, and IQ. The effect was relatively small, but it generalized across IQ and a standardized measure of academic achievement.

Missing an hour of sleep turns a sixth grader’s brain into that of a fourth grader.

“A loss of one hour of sleep is equivalent to [the loss of] two years of cognitive maturation and development,” Sadeh explained. There is a correlation between grades and average amount of sleep.

Teens who received A’s averaged about fifteen more minutes sleep than the B students, who in turn averaged fifteen more minutes than the C’s, and so on. Wahlstrom’s data was an almost perfect replication of results from an earlier study of over 3,000 Rhode Island high schoolers by Brown’s Carskadon. Certainly, these are averages, but the consistency of the two studies stands out. Every fifteen minutes counts.

Children who are able to delay gratification 15 times as long as their more impatient peers score 210 points higher on their SATs.

In one famous study, children were told they could eat two cookies if they delayed eating the first one. Those who could wait 15 minutes before eating the first cookie scored 210 points higher on their SATs than those who couldn’t wait more than one minute. Impulse control is a crucial factor in executive function. “Scientists know now that being a brainiac is not so much about IQ but about executive function,” Golinkoff asserts. “The ability to switch between tasks, hold things in your working memory, and inhibit impulses is much more connected with success than IQ.”

Source: John Medina. Brain Rules for Baby: How to Raise a Smart and Happy Child from Zero to Five. Seattle: Pear Press, 2010.

Aerobic exercise increases children’s executive-functioning abilities by as much as 100 percent.

“Being in good shape increases your ability to learn. After exercise people pick up new vocabulary words 20% faster”.  And the best way to achieve is to do the exercises with your children,” writes molecular biologist John Medina

Source: John Medina. Brain Rules for Baby: How to Raise a Smart and Happy Child from Zero to Five. Seattle: Pear Press, 2010.

The overweight middle-schoolers had lower GPAs than their regular-weight peers, as well as worse school attendance, more detentions, and more tardiness. This study associates higher body mass with lower scholastic achievement. “Being inactive has huge opportunity costs for children,” Golinkoff says. “If they’re watching TV or playing computer games, they’re not interacting—and many of the things that make us ‘smart’ are things learned only in the nexus of social interaction.

Learning to juggle can increase the volume of gray matter in children’s brains by 3 percent.

Brain structure is largely determined by genes, but not entirely. “Learning a difficult perceptual-motor skill—like juggling—induced a 3 percent increase in the volume of gray matter in visual attention areas,” write the Yale scholars whose report cites this figure. The volume of gray matter in the brain’s frontal region is linked with general cognitive ability, the scholars avow.

Students who spend more than two hours a day playing computer and video games score 9.4 percent lower on school exams than students who play no such games.

The effects of electronic game-playing on academic achievement spark intense debate. A study conducted on students in the U.K. compared the test results of frequent gamers with those of non-gamers. “Not a single significant positive correlation was found between gaming frequency and academic performance,” the researchers write. “Excessive videogame playing—like excessive anything—can interfere with schoolwork as well as reading for pleasure, playing outside, sleeping, or interacting directly with friends and families,” says Kennedy-Moore.

Unstructured playtime has always been an important part of "being a kid," but it is also crucial to a child's development. Hovering and over-parenting is linked with psychological problems.

"Free play" not only helps kids develop cognitive and social skills, it also helps them develop into happy, healthy adults in the future.

Source: Johann Hari: Over-parenting is the curse of our time 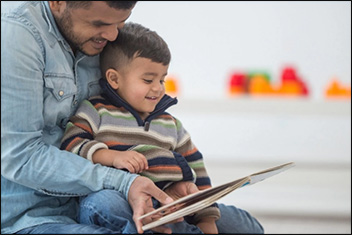 Got a little one who is learning to read? Don’t let them just stare at the pictures in a book while you do all the reading. Call attention to the words. Read with them, not to them. Research shows it helps build their reading skills. Shared book reading is enriched with explicit attention to the development of children’s reading skills and strategies, then shared book reading is an effective vehicle for promoting the early literacy ability even of disadvantaged children.

What you can read next

Newborn baby or Neonate refers to babies from birth till 28 days. Neonatal period is ...

YOUR CHILD AND DENTAL CARE

The birth of a child is a time to rejoice. As the milestones are achieved celebrations con...

Is your baby eye vision normal?

How well does your baby see? It may be difficult to know how well a child sees or should s...

Meet Our Expert View All